Freshwater Prawn Farming is aimed at producing freshwater prawns for human consumption.  Some of the problems experienced in freshwater prawn farming are just similar to those experienced in marine shrimp farming. Exclusive problems are brought in by the life cycle development of the major kind like the giant river prawn known also as Macrobrachium rosenbergii. In 2003, the global annual fresh water 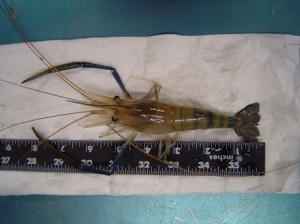 prawn production excluding crabs and crayfish was about 280,000 tons of which some 180,000 tons were produced by China followed by Thailand and India each producing some 35,000 tons. Additionally, about 370,000 tons of Chinese river crab known also as Eriocheir sinensis were produced by China.  The United States however, particularly in the South, is a great location for both freshwater prawn farming and shrimp farms and many are beginning to take hold in these areas.

Saltwater Shrimp Farming is an incredibly resourceful way of producing shrimp for human consumption. Also, the shrimp pond’s conditions can simply be controlled more  than shrimp that is fished from the ocean. This is due to the fact that seafood can sometimes be contaminated by pollution.